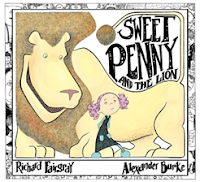 Are you tired of reading books about "good little girls?" I was recently sent a copy of Sweet Penny and the Lion, which shows one girl's humorous catalyst for change.

Sweet Penny always does what she's told. One day when she can't keep up with the rules for an increasingly confusing game, she's told to stay put - and she does, even when a lion threatens to gobble her up. He does, and something snaps within her, encouraging her to do what she wants, not what she's told.

The lilting rhyme makes the book even more light-hearted. While there's a temptation for kids to take the message to mean they should only do what they want and never listen, it does provide an opening for encouraging kids to question things respectfully and think for themselves instead of just blindly following orders.


Richard Fairgray is a writer, artist and colorist, best known for his work in comic books such as Blastosaurus and Ghost Ghost, and picture books such as Gorillas in Our Midst, My Grandpa Is a Dinosaur, and If I Had an Elephant. As a child he firmly believed he would grow up and eat all the candy he wanted and stay up as late as he liked. By drawing pictures when he wasn’t meant to and reading all the things people told him not to, he has made this come true.

Alexander Burke is an award-winning composer and musician residing in Los Angeles. Alex has composed music for films and soundtracks such as Iron Man 3, The Gift, A Little Something For Your Birthday, as well as TV shows like Mortified Nation, Funny Or Die, and too many others to list here. He is a guest artist for numerous albums and live specials for artists including Michael Bublé, David Lynch, Fiona Apple, Edward James Olmos, Dave Grohl, and Margaret Cho. Alex’s band, Magnolia Memoir, have currently released four albums. Please update this bio yourself with a black ballpoint pen as this number grows.
Bekah at 8:36 AM
Share