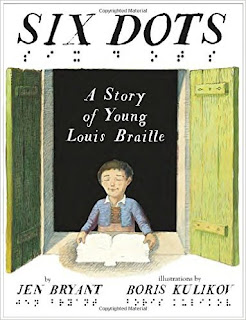 Louis Braille was just five years old when he lost his sight. He was a clever boy, determined to live like everyone else, and what he wanted more than anything was to be able to read. And so he invented his own alphabet—a whole new system for writing that could be read by touch. A system so ingenious that it is still used by the blind community today.

I recently had a chance to review a book about him, Six Dots - A Story of Young Louis Braille. I enjoyed this book, and so did both of my girls. It was fun, because they read it on their own first and then I asked them about the dots. They were both able to explain a little bit about Louis Braille, how he became blind and how the alphabet was developed. There's even a page with the Braille alphabet, and we explored writing in Braille.

This book is great, not just for explaining about how the Braille system was developed, but also to encourage young minds to develop their own solutions to problems, and to overcome obstacles in their lives.