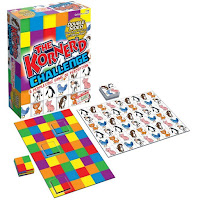 Are you up for a fast-paced challenge? I had a chance to review Endless Games' Korner’d Challenge. It's designed for players 8 and up, but could be played by younger kids (with some sort of handicap for old players). The game has a deceptively simple design: players have a series of tiles that they need to match on the board - but there's only one perfect match for each tile combination.

The board has two sides - one with animals, one with colors, so it changes the game up each time you play. Oddly enough, different people in our family had an easier or harder time than others based on which grid. It's good for families that like high-speed games, or for parents who are encouraging focus and observation skills in their kids (it can be played solo, just timing and trying for a personal best).


About Endless Games: Founded in 1996 by industry veterans Mike Gasser, Kevin McNulty and game inventor Brian Turtle, Endless Games specializes in games that offer classic entertainment and hours of fun at affordable prices. The three have an uncanny ability for discovering and developing hit games, having been a part in past successes Trivial Pursuit™, Pictionary® and Six Degrees of Kevin Bacon™. The mission of Endless Games is to produce high quality entertainment in board games that are quick and easy to learn but offer “Endless” play value. For additional information, visit www.endlessgames.com and interact with the company on Facebook, Twitter, Pinterest, Instagram and YouTube.
Bekah at 1:00 AM
Share